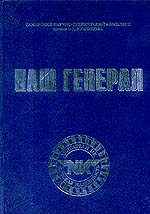 On June 23, 2001 there wasl the 90th anniversary of N.D. Kuznetsov's birthday. Nickolai Dmitrievich Kuznetsov - the General Designer, an Academician of Russian Academy of Sciences (RAS), a lieutenant-general of engineer technical service, twice Hero of Socialist Labor, Lenin prize winner and the USSR Council of Ministers prize winner, an Honorable Citizen of Samara Region, an Eminent Person of Samara Region, a holder of many orders and a designer who was highly recognized by the scientists of the whole world - had been at the head of the Scientific and Technical Complex, Samara (former experimental plant), Kuibyshev Scientific Production Enterprise "Trud") for 45 years.

Now this company is named after him. For 27 years Nickolai Dmitrievich had been a deputy of the Supreme Soviet of Russian Soviet Federative Socialist Republic. A bust of N.D. Kuznetsov is placed in Samara in a public garden situated at the crossing ofPobeda and Novo-Vokzalnaya streets. N.D. Kuznetsov Scientific and Technical Complex, Samara (STC) is one of the leading RF companies developing aircraft and rocket engines, gas turbines driving gas-pumping assemblies and power generators for 55 years.

By present more than 40 original and modified aircraft and rocket engines for passenger, military-transport and military aircraft Tu-95, Tu-114, Tu-142, Tu-126, Tu-154, Tu-154B, Tu-144, Tu-22M2, Tu-22M3, Tu-160, Il-62, I1-86, An-22; "Orlyonok" and "Lun" wing-in ground effect airplanes; N-l launch vehicle and gas turbines for gas-pumping units and electric power stations have been created by STC. About 50°/o of passenger traffic in the country at the beginning of the 90-s was provided by Il-62, Tu-154, Tu-154B, 11-86 aircraft powered by NK-engines. Practically the whole long-range aviation of Russian Air Forces is powered by NK- engines. NK gas turbines make about 34^/o power of gas-turbine fleet used in gas- pumping stations of the country. Most of the developments of the staff headed by N.D. Kuznetsov were marked by the following characteristics: "the first time in the world" or "the first in the USSR": - the first in the USSR and the most powerful in the world turboprop engine; - the first in the world serial liquid-propellant closed circuit rocket engine of high power; - the first in the world engines operating with liquid hydrogen and liquefied natural gas; - the first in the USSR three-spool by-pass engine. N.D. Kuznetsov used to say: "It is the staff- hundreds of designers and thousands of workers of our plant - they but not me determine the success of the work. Speaking about serial plants which produce our engines I must admit that their staffs which number tens of thousands workers and engineers finally define the level of motor- building development. No General Designer can ever do anything himself personally if he does not rely on his staff. "

In the effort to keep the memory of the prominent designer for the next generations JSC N.D. Kuznetsov STC prepared and JSC Navigator-F, Ltd. published collected publicistic articles and speeches of N.D. Kuznetsov as well as recollections of his contemporaries, colleagues, disciples about his activities. The presentation of this collection wasl hold on March 23, 2001. The collection summarizes the wide experience of Designer and a Human states the main principles of his life and work and allows to see the integrity of academician science and practice and it will undoubtedly help the young people to choose their professions demonstrating the great example of devotion to the profession and native land. The editorial board is grateful to the following organizations which provided assistance and financial support to publishing of the collected articles: Samara Region Administration, RAS Scientific Center in Samara, Samara State Aerospace University, AS SAD, Solidarnost Commercial Bank, Samarsky Kredit Commercial Bank, JSC Motorostroitel, JSC Kazan MPE, JSC Samara -Motor-Building Design Bureau, JSC Aviamotor, JSC Samara-Metallist, JSC Samaraenergo, AFES, State Scientific Enterprise EGA, JSC Aerosila, JSC Samara International Airport.

The editorial board intended to attract the attention of the scientific, industrial community and especially young people to saving and enlarging the aerospace potential of Samara region and country as a whole on the example of life and activity of our prominent fellow-townsman Nickolai Dmitrievich Kuznetsov.

The collection is compiled and editored by Prof. V.P. Danilchenko